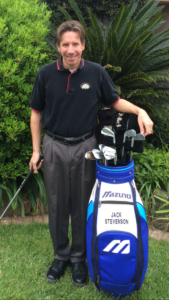 Jack began his his golfing career playing high school golf at Mission Viejo High School where he was the number one position on the team and earned the most valuable player award three years in a row. Jack then played college golf at Pointe Loma Nazarene University where he held the number three position on the squad. Jack then earned his PGA card in 1997 by shooting 76, 69, for a total of 145 in the PGA players ability test. Jack has competed in many PGA tour qualifiers and the California State Open. Jack has taught golf for many years and loves helping people improve their golf game.